Android and iOS, what’s going on?

The world of smart phones is very diverse and fluid. In recent years we have followed different families of operating systems dedicated to the development of mobile applications.
The social and geographical distribution of types of smart phones is emerging more clearly, taking as a benchmark of choice, well-paid managers said RIM’s BlackBerry, a mobile multi-function very business oriented and, as a choice of yuppie mage technology startups, the much loved or hated the Apple iPhone.

Geographically, Europe, especially in the United Kingdom and in areas of the north, the BlackBerry has a large market share to RIM that they hope to enlarge with the introduction of new models and accessories.
In the U.S., the technology of the iPhone also exceeded sales of the BlackBerry, confirming a trend already noted by the exit of the first models from Apple.

But it is fair to reckon without his host? And, most importantly, who is the landlord?

I introduce Android, the odd man out.
As you can see from the chart below, the distribution of applications that run through the Google Android operating system shows us an explosion in the spread of the green robot.

With about 80 million units sold in the first quarter of 2012, the Android OS “double” the Apple iPhone OS (about 33 million units, down from year-end 2011) and leaves in place the RIM with its 10 million specimens .

Time to get to grips with the new arrival? 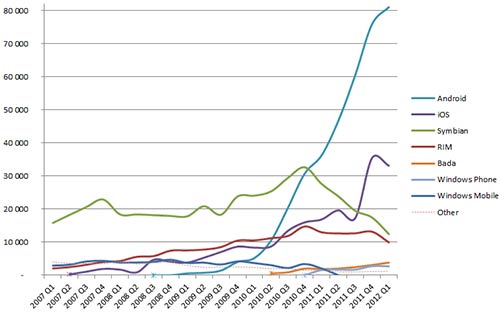 How much is SEO worth?